How did HB evolve? 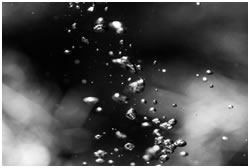 Holotropic Breathwork came about following an intensive period of time in history, where medical and psychological research trials with LSD were conducted between 1950 and 1976.

LSD was isolated in 1948 from ergot, found in the seeds of rye, by a scientist Albert Hoffman. Ergot is a component of Ergometrine, which is administered during the birth process, to prevent post-partum haemorrhage, due to its uterine contraction action. Centres of research investigated the concept of how LSD could help people in deep depressive states, post-traumatic stress disorder, OCD, addiction and fear of dying.

The research repeatedly showed major changes in mood and behaviour from the participants in the trials. In 1976 the US government banned all trials, and until the early 2000s research in official medical centres was prohibited. Click here to see the YouTube Video on Stanislav Grof – Holotropic Breathing.

Stan Grof, determined not to put to waste his years of LSD research with over 4500 people between 1960 and 1976, came to an important conclusion. He noticed that there was a common theme which arose with people during their sessions. Many reported that they seemed to be able to remember a womb experience, and a re-experiencing of their birth process. Within this process arose often a sense of dying and a sense of letting go. He created a map which is divided into 4 stages, called the 4 birth matrices, which are comparable to the stages of labour. This map can be used to help guide a person during their process, on the mat, but also as a guide during deep transitional processes in their lives.

This revolutionized what had been up to then a fixed view, by psychiatrists and psychologists, that we as humans, experience life as a memory starting at the time of our birth. He put forward the idea that we each hold memories of the birth, also intra-uterine memory and of conception itself. Many people reported other experiences, and visions, which seemed to link to the realms of collective unconscious and to what Carl Jung called, the archetypal realms. He encouraged people to draw or paint as they were coming out of their session.

What he was able to do from those years of research was to build up an incredibly detailed cartography of the psyche. He considered that by learning to ease our way through the transitional stages, whilst on the mat, releasing and clearing the imprinted traumata, and by viewing into the deeper realms of the unconscious mind, we thus have an opportunity to free ourselves from our protective false ego, so entering into a life with more authenticity and kindness, and with a less fearful view of death; releasing and making sense of anger and rage, which may originate from the fear experienced and stored during the original journey through the birth canal if we were born in that way. There is also a phenomena whereby those who have been born by caesarean section or, who have given birth by CS, store the memory of being unable to pass through the birth canal.

It is well known that indigenous people undergo rites of passage at different stages of their lives. For example the pathway from boyhood to manhood in particular is likened to a birth/ death experience in these cultures. It is in order to let die the boy and give birth to the man. This rite of passage is rarely done in our western society. The pathway from girlhood to woman is also rarely marked and the rite of passage from young woman to older woman and young man to older man is rarely honoured.

From ancient times practices, many of which are continued today, were used to reach enhanced states of awareness. Deep meditation, yoga, chigong, chanting, drumming, fasting, dancing, cacao and medicinal plant ceremonies are used to enter into deeper states of consciousness. It is at these deeper states where we can access our true selves, and remember our pure essence, leaving behind and dying to our false protective ego which denies us knowledge of our full authentic selves, assisting us to make the different transitions more smoothly throughout our lives.

Stan discovered that at some stage during the journey using LSD, an instinctive way of breathing arose in many participants. Faster and deeper rhythmic breath. The body seemed to breathe itself. This is in fact how women as part of their labouring process instinctively breathe to stabilise, and keep centred and empowered, assisting themselves in not succumbing to the innate fear which could overwhelm them. Using the breath they enter into an enhanced state of awareness. The Holotropic Breathwork system arose from the original observations he made. Over the years since the mid ‘70s a safe system of self-healing has evolved which uses only the breath. To learn more about this click here. To learn more about this click here.

How does HB work? 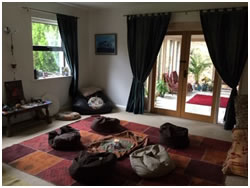 Healing is said to come about when an emotional intensity is reached which matches the original trauma. It is not re-traumatising so long as the set and setting, and the container of the workshop is pristine, and the space held strongly and safely by experienced facilitators, who have done hundreds of hours of therapy and self-exploration using this system.

Using the breath and guided by music, intentionally chosen to help guide you through the 3 hour session, an invitation is made for you to enter a deep enquiry so to learn more about yourself, to have a chance to heal, and to create a new pathway for your life. This may help to open up a channel to more fully and freely express your true self. By releasing what may be a crippling fear of expression, or a fear of dying, which is usually deeply subconscious, it is possible to live a life with more ease and happiness.

During the session, you are partnered up so that you are never alone. This in itself can be deeply healing, as you and your partner bear witness, and offer non-judgmental support, without interfering with the other persons process. The very act of being witnessed and also by bearing witness, to another’s process, can be a sacred and loving act. Following the breathwork session, before you return fully to ordinary consciousness, we encourage you to document aspects of your journey by way of drawing and painting, on a mandala circular style paper. Journaling also is encouraged.

In 2001 I did my first Holotropic Breathwork journey. I was curious, and as I had already been trained in Traditional Chinese medicine using energy medicine in my own personal practice, it was no surprise to experience the incredible energetic release which so often arises during a session. 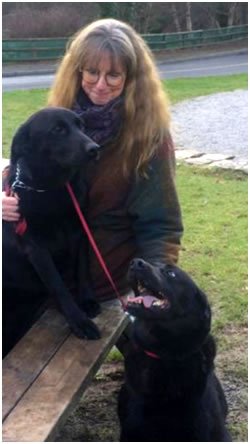 The breathwork journey during my training between 2007 and 2012, and continuing since this time, during regular workshops, for me opened up a doorway to see the deepest areas of trauma in my life, in past lives and to connect to trans generation ancestral trauma.

My first session centred around my birth trauma which was as a result of being delivered by forceps and where my mother was given a form of sedation which put her to sleep and also me, as the baby, too. This scenario I re-experienced as if for the first time, but was able to have assistance from facilitators so that eventually I was able to clear the imprinted trauma, and pass easily through the recreated birth canal. The birth of my son, who is now 26 years old, was terrifying for me – I was trained as a midwife, and knew too much! I opted for a home birth. It was long and arduous, but with the presence of acupuncture and two midwives, one of whom was my dear sister, and my husband and Labrador dog, I survived. It was years later that I realised I was suffering from a type of post-traumatic stress. This meant that I was in chronic shock.

The breathwork system, absolutely helped me to clear this shock, and re-experience the birth of my son in a different way. It has helped to release the anguish which he and I were unconsciously locked into, by our shared experience of an innate fear of dying, which can be so often the experience of women in labour. By freeing this up in me, I feel I was able to open up a new creative channel with art and writing and an ability to express myself.

During the later years of exploration, I was able to uncover the mystery of my mother’s deep depressive illness, which had arisen when I was 5 years old. She was diagnosed with ‘Endogenous depression’, which did not respond well to over 14 ECT treatments, and strong anti-depressant drugs, which she took for the next 30 years. During my intuitive exploration, as I regularly entered the state of expanded awareness, and also as I appeared to replicate some of her anxiety traits, I realised that she had in fact suffered an extreme hormonal and adrenal crash, where many of her hormones suddenly became depleted. She suffered all the menopausal and stress symptoms of anxiety, exhaustion, and despair, which so often at that time in the 60s and 70s went undiagnosed and is still grossly misunderstood. Her illness had a very deep effect on our family, and the healing of this for me took place with the help and guidance of psychotherapy, acupuncture and herbs, and colleagues and friends within the community of Holotropic Breathwork. Gabor Mate’s compassionate take is expressed in one of his seminars “When the body says No” view here.

It is my honour to offer my help and guidance should you decide to embark on a journey of self-discovery using Holotropic Breathwork.

We offer regular zoom session about Holotropic Breathwork and Consciousness exploration with time for questions and answers.

A phone chat which will be followed by you submitting a medical questionnaire. This work is not suitable for everyone.

Before each workshop we ask that you attend a preparatory zoom introduction session. We share with you the different roles and responsibilities of breather, sitter and facilitator and it is a forum for questions and answers. You will meet the other participants and we have found that this helps to create a more open-hearted and less anxious entry to the workshop. We follow up the workshop one week later with another zoom gathering to help you to support your integration experience.

Join Celtic Holotropic to surf your inner landscape in holotropic […]

Join Celtic holotropic to surf your inner landscape in holotropic […]

One on one Breathwork experience 180 euro

For lower waged and unemployed

There is an option for instalment payments.
There may be a small bursary fund.